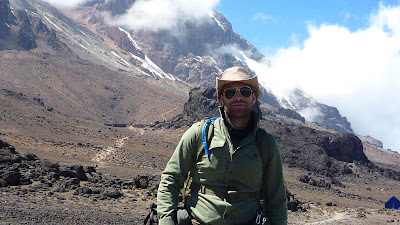 What an amazing day! After a breakfast of hot porridge (my favourite meal so far) we set out from our jungle camp further up the mountain. We kept climbing through the jungle for a couple of hours. It was a breathtaking morning and the sun was out, where possible spraying its rays through the canopy of leaves and vines created by the dense jungle that enveloped us. The scenery this morning was breathtaking and it was impossible not to wear a broad smile as we progressed.

Today's climb was to be one of the longer treks of the trip, as we would be climbing for about six or seven hours and would elevate from 2600 metres up to 3800 metres and then back down to 3600 metres, where we would camp on the Shira Plateau. As a result of the altitude and distance we were covering we experienced several different types of terrain, moving from dense jungle to moorland to mountain scrub land.

After approximately two hours of walking the jungle suddenly and abruptly stops and is just as quickly replaced by moorland. The freshmint blue sky opened up before us, as a combination of elevation, soil quality and weather conditions could no longer support the growth of towering trees. Bushes, grasses and mountain flowers replaced the jungle as the landscape turned burnt green, orange and yellow. We climbed and traversed the rocky moorlands for another 2 hours before lunch. The vistas were as different to those of the jungle as they were beautiful. The expansiveness of the views was stunning, with ripples of jungle extending beneath us in every direction. I enjoyed the openness of the terrain, as the warmth of the late morning sun pressed against my skin.

The climb from our lunch spot up to the Shira ridge was steep and challenging but yielded the most phenomenal view yet. We literally climbed through the clouds onto what felt like the roof of the world. Ironically we had only climbed to 3800 metres and had a further 2095 metres to the summit (which we still had not seen). Nevertheless the combination of the steep climb, low clouds and amazing views made me feel like I had already reached the peak... it wasn't long before my perspective was changed dramatically.

After about an hour of traversing along the Shira Ridge that we caught our first glimpse of Mount Kilimanjaro. The snow capped Kibo peak appeared from behind the Shira Ridge, towering above everything else around it. It is undoubtedly a magnificent sight. It put the climbing of the previous day and a half in perspective and there was an immediate realisation that this gigantic rock will dominate our lives for the next 6 days.

We began to descend onto the Shira plateau with the mountain directly in front of us. After about a further hour of walking we reached Shira camp on the plateau itself. The camp is very exposed so all I could think about was how cold it was going to get in a few hours. We all unpacked our gear into our tents - we have individual tents that quite spacious - and then had popcorn and tea or coffee. This would become the post climb ritual everyday.

After sleeping for an hour or so we awoke for dinner - soup followed by chicken and rice - which was as good as the previous night.

Posted by Anton Kaszubowski at 07:10