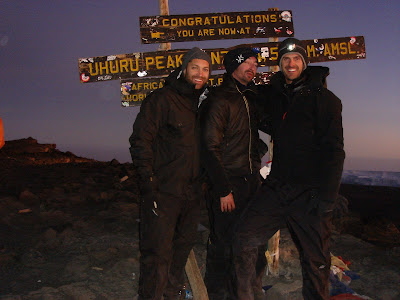 Summit night started out well... after a dinner of potato stew at 5pm we all went to bed to get a few hours of sleep before climbing thorough the night. None of us managed to sleep much as the imminent challenge was playing on our minds - a combination of excitement and foreboding at the prospect.

We were all awoken at 11:30pm by Bruce and immediately changed into our climbing gear. This consisted of many layers. For example, I was wearing four bottom layers (2 thermals (breathable!), hiking trousers, waterproof/ windproof trousers) and five upper layers (2 thermals (also breathable, to avoid becoming drenched in our own sweat), fleece, soft shell jacket, waterproof/windproof jacket) ... I literally felt like I was wearing a fat suit... however, the layers were necessary as we would be climbing in minus ten to fifteen degree celsius temperatures.

Up until that point I had been extremely happy with my general appearance on the mountain... as you all can imagine with Paul and Semjon on this trip significant efforts were made by all to maintain mountain chic throughout... Rather flatteringly, Paul and Semjon both agreed that I was consistently the best coordinated and turned out of the group... dare I say, the entire mountain. This was a totally unexpected and major compliment coming from such fashionistas ... I glady welcomed their plaudits. My mountain 'look', not that I realised I had one until told as much, basically consisted of army supplies acquired from my local army surplus store in Notting Hill. Lots of khakis and beiges seemed to go down well with the the self appointed mountain fashion police... I took considerable consolation that all that anything I might lack in mountain hardiness was more than made up by the 'look'!

Once changed into our fat suits, we had a cup of soup and set out into the dark of night, illuminated only by the moonlight and the head torches strapped to our foreheads. We immediately started up a significant slope...

The climb itself lasted just over six hours. We were at the head of all the climbing parties so hundreds of spotlights snaked into the darkness beneath us ... during the climb we were passed by a few climbers who were ascending with considerable velocity ... personally, I couldn't see the point of rushing up the mountain, as you would reach the summit well before sunrise and have to sit around in the cold and dark ... Contrastingly, Paul seethed everytime we were passed by anyone, prefacing his actions with comments like, "I know it's not a race, but I really want to get to the top first ...".

At the point where we were passed by the first group of climbers we were about 3 hours into the ascent and stood at 5450 metres. It was at this point that I started to find the climb difficult ... my head had begun to pound and my legs were putting the brakes on ... the summit climb was probably the most physcially gruelling and demanding experience of my life. Each individual's body handles the climb differently - while Semjon was basically feeling "great!" most of the way up (more about that later...), I suffered every step of the way. A severe headache, bitterly cold extremities, a constant feeling that I was about to violently throw up at any moment and dizziness converged upon me ... consequently the energy and spirit began to drain from my body and mind... this inhuman feeling was effectively my personal hell for the rest of the climb and subsequent ascent (lasting just over 5 hours in total).

While the actual climb itself is by no means the toughest in the world (the 8 to 10 hour total duration is an energy sapper), the combinbation of freezing temperatures, near darkness and the worst hangover you have every experienced (those of you that know me well, will certainly attest that I can speak with significant authority about brain splitting hangovers) made my personal experience nothing short of a living nightmare. Nevertheless, I wasn't about to give up after putting so much effort into getting to Tanzania, Kilimanjaro and then 450 metres from the summit. Also, we were raising money for charity so I would have felt like a fraud had I given up a any point.

Constrastingly, apart from a mild headache and finding the climb physically tiring Semjon was basically really enjoying himself... to the point where, at about 6am as were were approaching the Uhuru Peak and the sun was beginning to creep over the horizon, he burst into a gleeful rendition of the Beeatles "Here Comes The Sun". Paul was feeling poorly, but was coping well, as he clearly still appeared to be more bothered by not being first to the summit than his symptoms... I guess I am just not cut out for altitude ... from now on I'll be sticking to significantly more terrestrial pursuits...

We all reached the Uhuru peak (5895m) a little before 6:30am, just in time to see the sunrise above the clouds. We were surrounded by massive, brilliant white glaciers to our left and an expansive volcanic crater to our righthand side. I don't remeber how long I remained at the summit ... enough time to take the obligatory pictures (in spite of everything, of course I managed to muster up a few smiles for the occasion!!!), get some video (although most of our cameras were frozen) and exchange hugs with Semjon, Paul and our guides.

Sadly, I don't remember much more about the summit experience. Anything else I try to recall is masked by an overriding sensation of devilish pain. I personally regret that I was unable to enjoy the beauty of the summit more than I did... however, at the earliest opportunity I grabbed our assistant guide (we had Bruce and his assistant, Charo, bookend us up the mountain) and commanded him, "Down!".

The descent takes about two hours and consists of skating down steep slopes of loose gravel, while trying to avoid large rocks and precipices on either side. I continued to feel awful all the way down, as I got increasingly overheated in my fat suit when the as the sun got stronger. I didn't stop once on the descent. My overwhelming compuslsion was to reach the preceived safety of the camp at 4900m. Once at the camp, I collapsed into my tent swallowed a handful of painkillers and passed out.

Meanwhile, back somewhere up the mountain Semjon was having the time of his life - individually congratulating every climber on their achievement and cracking open beers. To his credit Paul, in spite of his naseua and massive disappointment that he didn't "get there first", persevered with Semjon's summit euphoria. Paul hung around for as long as his body and mind could cope, which was he tells me about 25 minutes, until he ushered Semjon downward.

If there was an award for happiest climber on the mountain, Semjon would have surely won it (as well as the runner up prize). I noticed no other climbers on the mountain enthusiastically greeting eachother. Most people either wear pained experessions or just shiver with cold - or both. WELL DONE SEMJON!!! You summited the way it should always be done...

By the time the others got back to camp (around 9am) I had passed out. We were all awoken again at 11am, packed our belongings, had a light lunch and then commenced a 5 hour hike down the mountain to 3100m. A 9 hour summit climb and descent followed by a 5 hour hike down a further 1800m was pretty brutal - by a significant margin it was the hardest day we experienced during the trip.

Talking with friends back home, there appears to be a common perception that climbing Kilimanjaro is not great challenge ("after all Cheryl Cole's even done it..."). All I can say to that is you must try it for yourself. Trying it firsthand may change your opinion (as it did for me). Its impossible for one to pass judgement without knowing how your body will react to the conditions. We all, even the bionic Semjon, have much more respect for the mountain than when we first arrived at its base.

The presence, beauty and challenge of Kilimanjaro is not something that one should underestimate easily...

We arrived at our final camp on the evening of the Summit night/day. We polished off a quick supper of chicken and beef stews and promptly fell into our tents for 10 hours of uninterrupted slumber. The camp was the first location where I got a decent signal for my iPhone so I finally made contact with the outsdie world (apart from the blog of course...). I spoke to my girlfriend - it was great to be able to share the news of the successful summit with her ... I went to bed feeling happy and content with the days work!

Posted by Anton Kaszubowski at 10:05