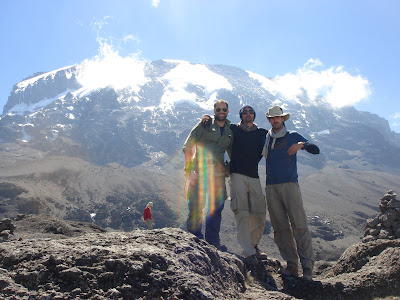 We all awoke on day six feeling like Semjon - "great!". We all slept really well and the nausea of the previous day had gone. The only downer was the porridge. It was practically water and the usually unflappable and uber positive Semjon was beside himself - downcast and genuinely upset. The only time Semjon ever has a sense of humour failure revolves around a lack of food quality or quantity. Otherwise he is one of the most upbeat and positive people I've ever had the pleasure of meeting.

The Baranco Wall turned out to be less of a challenge than we had imagined on first glance the previous afternoon. All feeling well, our collective spirits were high and climbing the wall (it was quite vertical in places and was more of a climb than a hike) was great fun. We all agreed that climbing was the most fun as opposed to descending which is quite treacherous. The climb took about 45 minutes in the strong morning sunshine. At the top of the Baranco Wall we had reached 4200 metres.

We spent the rest of the morning walking around the base of Kilimanajaro to the Karanga camp which sat at 4100 metres. The walk was great fun and the scenery, situated well above the solid blanket of fluffy clouds below (including great views of Tanzania's other great mountain, Mount Mehru's summit poking through the clouds), gave us the opportunity to take as many stupid pictures as possible. I'm sure that you can all imagine that between the three of us, we've spent a fair amount of time taking pictures of each other (Paul and Semjon keep fighting over the travel mirror). We have a lot of serious photos of us in various explorer type poses in front of the mountain or clouds ... from hundreds of angles... Our stupid pictures mainly consisted of us jumping (star jumps, leg kicks and other various contortions against a backdrop of either clouds or mountain... as there's not much else around) or making faces. I'm sure a few of them will make it up onto the blog. During our photoshoot we received a lot of funny looks from other walkers and guides, but we were having fun.

We got to Karanga camp at around 1pm and had lunch. We then spent the rest of the day relaxing. We don't climb in the afternoon for the next couple of days so that we build/conserve energy for the summit climb.

Paul took advantage of the downtime to wash his hair (again), which Semjon filmed (again). They then went off to take more stupid photos while I updated the blog and tried to make calls (unsuccessfully). The evening was spent playing cards and relaxing. The downtime was important because our bodies needed the time to continue to acclimatize. Tomorrow we would be climbing up to 4900 metres, where we would spend the afternoon and evening before commencing the summit climb at around midnight on Sunday morning.

We fell asleep in the shadow of Kilimanjaro... In just over 24 hours, all going to plan, we will be on top of it...

Posted by Anton Kaszubowski at 15:26