Day Five: We're supposed to be on vacation... 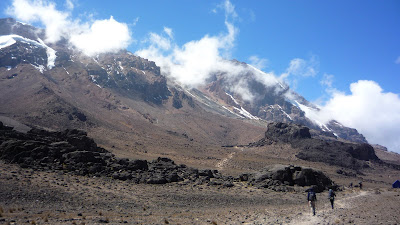 I awoke on day five feeling much better than I went to bed. My nausea and headache had dissipated. We all had breakfast together and I had a couple of bowls of porridge (still runny... Semjon's hopping mad!).

All felt pretty good until we started walking... we immediately started climbing a steep slope and I immediately started to feel fatigued. I don't remember much of the morning except that we were walking for several hours that were excruciatingly difficult for me... I was totally knackered. Every step felt like I was wading through thick mud. All I could do was literally concentrate on taking the next step... anything more just seemed too difficult. I have never felt anything like as tired as I did this morning, even when I ran the London marathon. I really was dealing with physical sensations that were totally alien to me and I felt like I could have collapsed several times. I guess it was a combination of altitude sickness and being weak from the previous night's illness. I remember asking myself over and again, "Why am I doing this... I'm supposed to be on vacation".

Thankfully, we all made it to lunch - Semjon and Paul were doing well and feeling energetic all morning - at the Lava Tower, which sits at 4600 metres. Once I got to our dining tent I slumped in my chair. If I had a bed I would have passed out cold. However, head in hands, I gathered myself and forced down lunch, as I knew that my body needed energy. I immediately felt better during and after lunch. This was in stark contrast to Paul who suddenly began feeling pretty ropey. Before long he was around the back of the tent throwing up what little lunch he had forced down. Semjon, on the other hand sat there feeling "great!"...

We started out after lunch, which was basically a long descent to from 4600 to 3900 metres. It seemed pretty pointless to get up so high and then go back down again, but that is the best way to avoid altitude sickness ("climb high, sleep low" is the mountaineers maxim). Paul threw up again on the way down and after feeling much better, I started developing a bad headache.

We all couldn't wait to get to the next camp ... I was feeling physically awful and was questioning the whole idea of climbing the mountain, which was now 2000 metres above us. I just wanted to sleep.

We all collapsed when we got to camp and slept for several hours. I took Nurofen and felt much better when I awoke for supper. Paul also arose feeling rejuvenated.

Feeling quite pleased with ourselves, the way you do when you have managed to get over a nasty hangover, we ate a tasty supper and immediately went straight back to bed.

Tomorrow we would be climbing the Baranco Wall first thing in the morning. It's called a wall because it's a cliff face which must be traversed. However, the climb is literally vertical in some places. I knew that I had to be feeling much better tomorrow otherwise it was going to be a real struggle and there was even a chance that I wouldn't make it to the top. We all went to bed to get a good ten hours of sleep. I shut my eyes hoping for an uninterrupted and rejuvinating night's sleep.

Posted by Anton Kaszubowski at 15:24